Massage therapy dates back thousands of years ago. Ancient cultures always believed in the profound wellbeing it procured. The first records of massage therapy are found in China, India and Egypt. These ancient civilisations understood that massage could heal injuries, relieve pain, prevent and cure illnesses. They also where convinced it helped reduce stress and produce deep relaxation. Today, massage therapy stands as a highly respected holistic healing method practiced around the world. Here’s how massage has evolved into the relaxing and therapeutic practice it is today.

The first known written massage therapy traditions come from India and China. Practice may have actually originated 3000 BC. Texts detailing the Ayurveda massage were written in India and widely adopted throughout Southeast Asia. 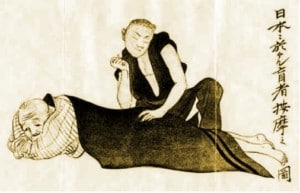 In China, the medical benefits of massage therapy date back to approximately 2700 BC. In ancient documents the importance of Chinese medicine and Acupuncture is descripted in detail. Based on these methods Acupressure -massage through pressure points- was and is largely practiced.

Egyptian hieroglyphs show that massage therapy was a part of its healing tradition. Egyptians practiced a form of foot reflexology. Their studies and traditions greatly influenced other cultures such as the Greeks and Romans.

Between 800 and 700 BC athletes in ancient Greece received massage to keep their bodies in peak condition prior to competitions. Herbs and oils in combination with massage techniques where used to treat many medical conditions. 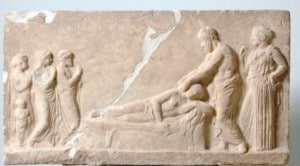 During the Roman period, while the wealthy received massages in their homes by personal physicians, many Romans received massages in public baths. They would first bathe themselves and then receive a full body massage to stimulate circulation, relaxation and general wellbeing.

In Europe after the fall of the Roman Empire, massage gradually lost its importance and during the middle ages and Renaissance there is little significant documentation of the use of massage practice.

But it was only in the beginning of the 1800 that there is a gain of interest due to the progress in medical science. A Swedish doctor, gymnast and educator named Per Henrik Ling developed a method known as the “Swedish Movement System.” Today Swedish massage is one of the most common type of massage practiced in the western hemisphere.

Through the early part of the 20th century, an increasing number of new and rediscovered massage techniques were documented and practiced. In particular, massage was used to treat World War I patients. However, massage remained out of the mainstream as a form of treatment for many years. It was perceived as a luxury reserved for the wealthy.

In the middle of the 20th century, rising interest in natural healing methods revitalized massage. More and more massage therapist in many countries started to develop different techniques like Californian, Lomi Lomi, Thai and deep-tissue. People started to develop licences and education. As a result daily millions of people around the globe receive massage.

Today’s massage therapists practice a multitude of techniques originating from ancient methods. Our cultivated ancestors have laid centuries ago the base for modern massage practice, so therapist can help others to increase physical and emotional well-being and experience a higher quality of life.