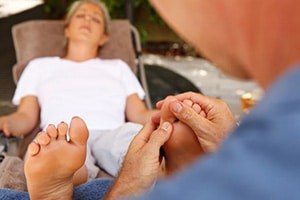 This is a healing art of ancient origin from China. However, Doctor William Fitzgerald, who made a name for himself in the 1920’s, is considered the father of modern foot reflexology.
The basic analgesia considers the foot to be a miniature representation of the body. From there, each zone or body organ has a link to a precise point in the foot.
Foot reflexology grew in the United States and became widespread thanks to Doctor Eunice Ingham, who largely diffused the method in the 1930/40’s. 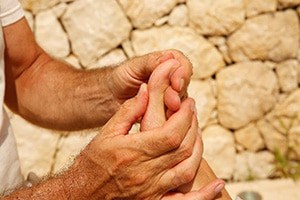 In the 1950’s the method soon spread throughout Europe.
It is characterised by a foot and arch massage. A soft massage is given with pressure applied to precise areas of the foot, with the thumbs, « the pressure points » corresponding to areas or organs in the body. Pressure allows tensions to release.
It is a therapeutic discipline and Blue tree practices this to support wellbeing without therapeutic implications

This type of massage is performed on a reclining chair. The client remains dressed.
It particularly helps: